“From the OG Living studios in sunny south Florida, via Nashville Tennessee, it’s The Nashville Hype!™.” And thus starts a new journey in the iconic blog that began in 2006 and became one of the most widely read, respected, and influential music blogs in Nashville, with an unparalleled record in helping artists be discovered and signed to deals.

Today The Nashville Hype!™ is both a radio station streaming 24/7 and podcast hosted by Paul King that is available all over the world on the iHeartRadio network (or where ever you get your streaming content – Apple, Spotify, etc).

The radio side of The Nashville Hype!™ plays ‘feel good beachy / party’ island music from or about Nashville, as well as the top hits in country music. The podcast features the hottest Nashville songwriters, artists, entertainers, sports people and business leaders in Nashville. 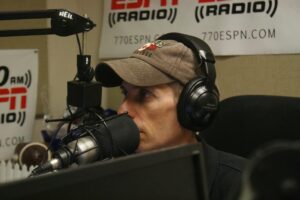 By the time 2006 had rolled around, I (Paul King) was 36 years old and I had written songs with Grammy winners, Dove Award winners, a Songwriter Hall of Fame member, and several #1 hit songwriters in town. It didn’t hurt that I was born and raised in Nashville – in, or certainly around, the music industry.

My parents, known on radio/TV and around all the southern states as the southern Gospel singing group The Glorybound Singers – moved to Hendersonville, TN when I was 6 years old. Hendersonville in those days was where the music industry lived – even if they worked in Nashville.

My first girlfriend was George Jones and Tammy Wynette’s daughter Georgette. Tammy lived around the corner and I would fish all around the lake around her home.

My childhood best friend’s grandfather lived only a few doors away and drove the bus for Johnny Cash – which meant I grew up, literally, with Johnny.

The Oak Ridge Boys were always present, as well as the Goff’s and Hemphill’s.

I was friends with Mr. Jenkins (aka Conway Twitty) kids.

And one best friend in particular, met in 10th grade, would cement a life of being in the industry, as his father, Eddy Raven (8 number 1’s, 18 top tens – I think) essentially became like a step father to me. My friend wasn’t nearly as interested in following in his dad’s footsteps as I was – and Eddy taught me a lot as a kid – songwriting, production, live shows, etc. A real mentor if I ever had one, even if he didn’t know he was teaching and I was learning.

I have dated named artist, hung out backstage with … everyone it seems, played shows with huge stars; did public relations, marketing, booking, events, played on the radio, been seen on TV … you name it and so much more.

After a long career in Nashville, I started NashvilleHype! – with a pretty good set of musical “ears” as they say in the business – rare even for today – in order to find artist and give them the “boost” I never really felt like I had myself.

Lady Antebellum (thanks to friend and photographer Glenn Sweitzer) came first. Then Rissi Palmer, Jaida Dreyer, The Hewitt Sisters, Laura Fedor, Hot Chelle Rae, and others. All were ultimately signed to some kind of deal. Some, very successful. Meanwhile, NashvilleHype! was in the background. Working to secure labels, managers, publishers, press – and ultimately, more fans for those artists. There’s a lot more to tell, but I will save it for another time – and the podcast.

Now it’s 2022, and The Nashville Hype! is the next iteration of the old blog. This new iteration is a radio station streaming 24/7 at TheNashvilleHype.com, and podcast heard all over the world on the iHEARTRadio network (or where ever you get your streaming content). Subscribe to the YouTube channel for extra content and click the like button. I appreciate it. And thanks for reading all this. Hope you found it interesting.

or find us on TikTok